Xigera Safari Lodge is an interplay of art, design and craft.

Through the interplay of art, design and craft, Xigera Safari Lodge boldly reinterprets what it means to be sustainable in one of southern Africa’s most pristine places.

Three years in the making, the all-new Xigera Safari Lodge is the latest addition to Red Carnation’s southern African collection of boutique boltholes, which includes the Oyster Box in Durban and the Twelve Apostles in Cape Town. From the air, the stretched tent roofs of the 12 sprawling guest suites and central lodge areas are barely visible between the dense riverine forest of ancient hardwoods surrounded by permanent water channels. 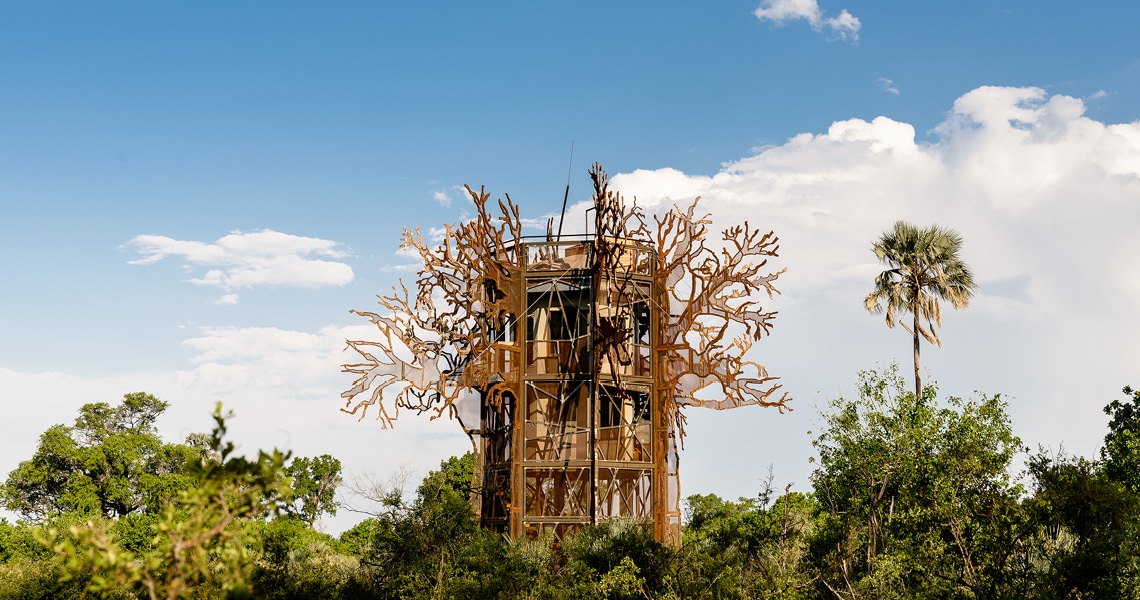 Botswana is one of the trickiest places in southern Africa to build a lodge. The use of anything that may contaminate the pristine waterways – such as concrete, cement or bricks – is not allowed. The country’s strict environmental guidelines are one of the reasons why the delta and other wild places have remained unspoilt and desirable, and why a safari here comes with a hefty price tag. 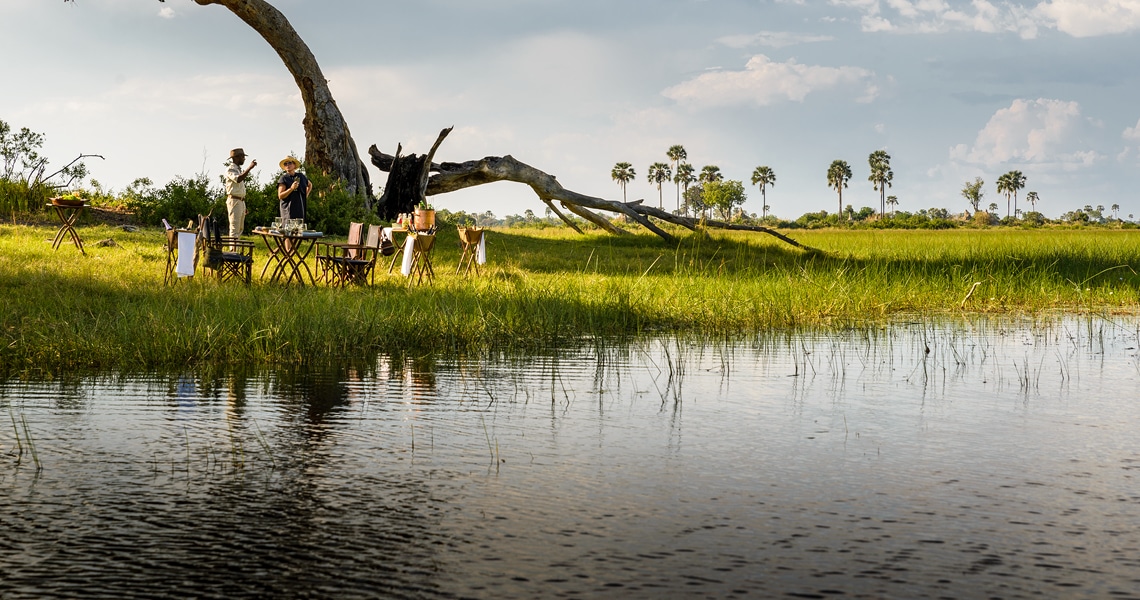 Xigera is an unashamedly extravagant ode to Africa – and it is the most sophisticated and sustainable makeover of an existing camp in the Okavango Delta to date. Architect Anton de Kock, who was also the creative genius behind the Tollman family’s ambitious restoration of the Oyster Box, kicked off his initial exploration of the site with a mokoro trip to immerse himself fully in the landscape and get to grips with the integral role that water plays in delta life. He incorporated the idea of birds in flight – Pel’s fishing owls, marabou storks, and the pied and woodland kingfishers, all so evocative of the area – and was inspired by the perfect symmetry of the water lily. He said there was a huge responsibility to be accountable for the energy efficiency and durability of everything selected for the new lodge, from building materials to furnishings, to minimise its carbon footprint. Where possible, existing infrastructure was reused or repurposed. 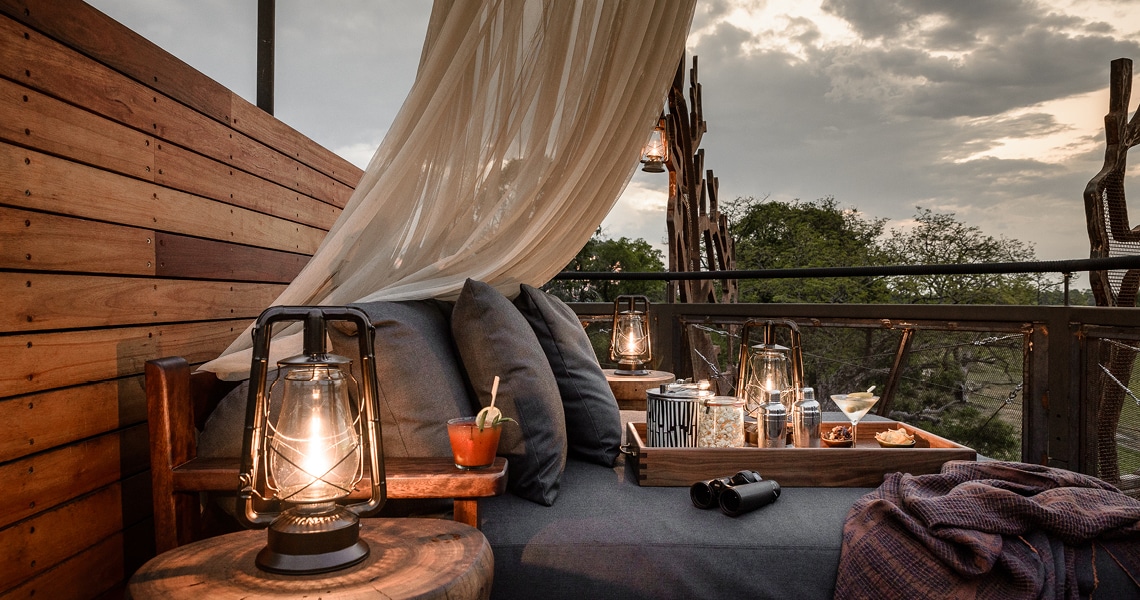 Central to the efficient off-grid running of Xigera is a state-of-the-art solar hybrid power system, which supplies almost 100% of the camp and nearby staff village’s energy requirements. Thousands of litres of diesel and 190 metric tonnes of carbon emissions are saved a year – but there is so much more to it. 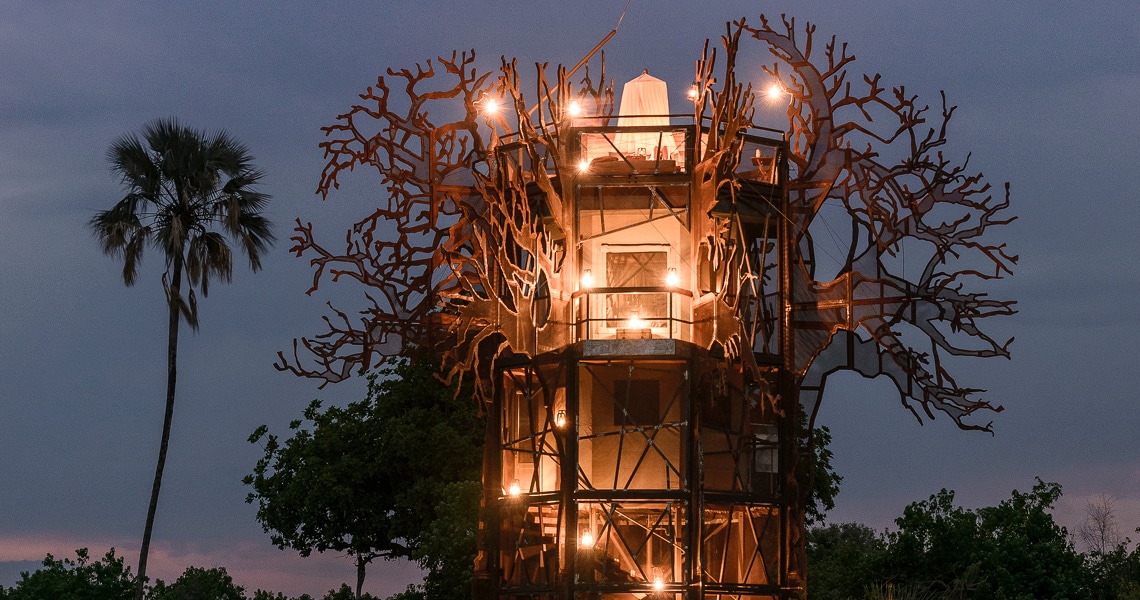 An on-site composter for organic kitchen waste produces “black gold” to boost the kitchen gardens that provide employment. The cleaning products and the gorgeously scented guest amenities – packaged in recyclable grass-green glass – are all biodegradable. There isn’t a piece of single-use plastic in sight. Grey water from the above-ground Calcamite sewerage system is safely used for irrigation. The water supply throughout the lodge is purified via the latest reverse-osmosis technology before being re-mineralised. Tap water is perfectly safe to drink, even when you’re under the shower. Thermodynamic geysers supply endless hot water while using minimal energy, and the tinted glass windows in the guest tents insulate the interiors against heat and cold, depending on the time of year. 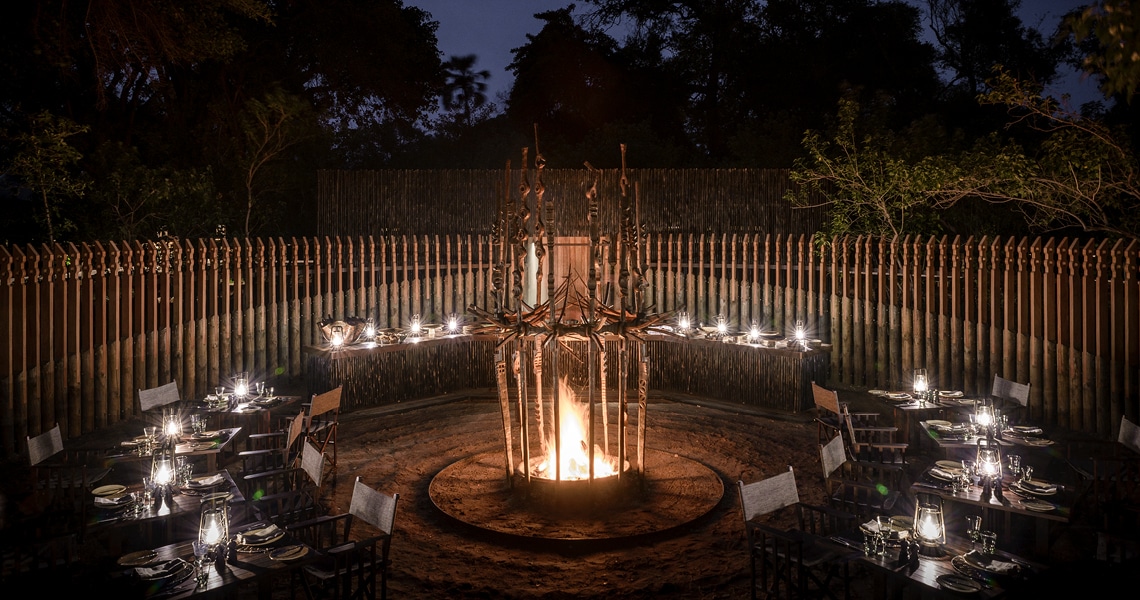 Toni Tollman, who curated every aspect of the interiors rich in narrative and African provenance, collaborated closely with Trevyn McGowan of Southern Guild in Cape Town to pull it all together. Whether working on site or making magic in remote studios and workshops across the continent, bronze sculptors, cabinet makers, ceramicists, blacksmiths, weavers, bead workers and other skilled artisans created an ambitious volume of work in record time.

Here life-sized woven nests by Porky Hefer offset bespoke, handwoven carpets by Coral & Hive. Sculptor and arborist Adam Birch spent months on site, hand-carving trees right where they had fallen to produce dozens of organically shaped benches and chairs. A bronze sculpture of a lily, designed by De Kock and created by Bronze Age’s Otto du Plessis, is reflected in the delta above a spa pavilion, where outdoor sunrise yoga adds a spiritual dimension to your morning safari. Equally monumental is the Baobab Treehouse, a three-storey sleep-out retreat about a kilometre from camp, where the adventurous can slumber under the stars. 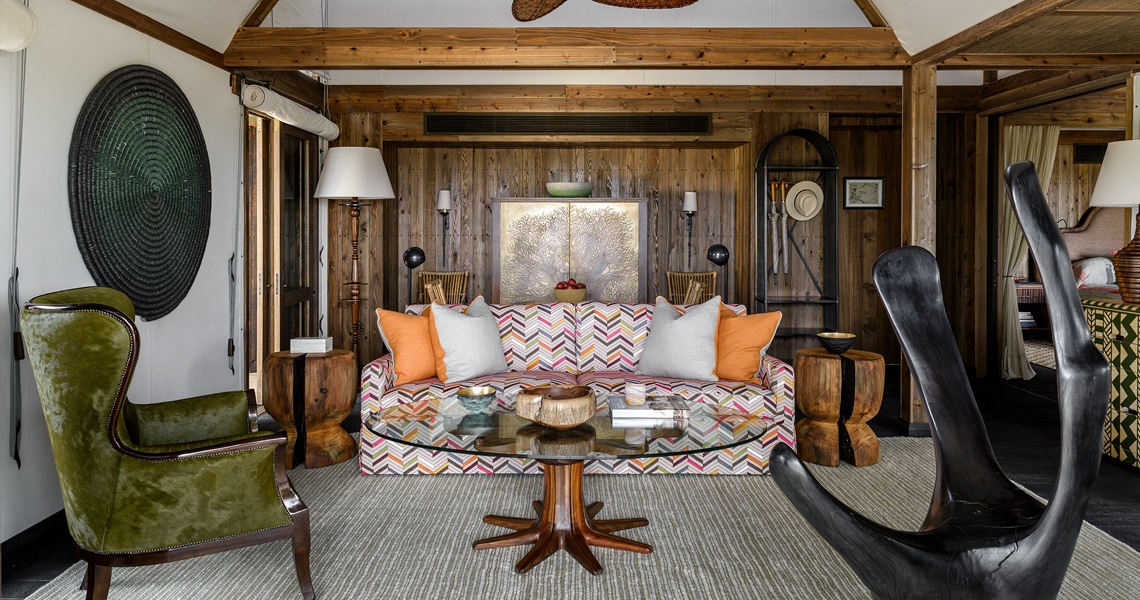 Depending on the time of year and the water levels in the delta, arrival at camp is either by boat, glass-bottomed mokoro or one of the matte-cream game-viewers (because glossy paint apparently shows every scratch on these robust workhorses). Up close, as you move through the camp and engage with the interiors – and see how they echo the surrounding textures, colours and shapes – the realisation that this is the biggest single collection of African design anywhere in the world hits home, along with an understanding of what sustainability means on an intrinsic level. 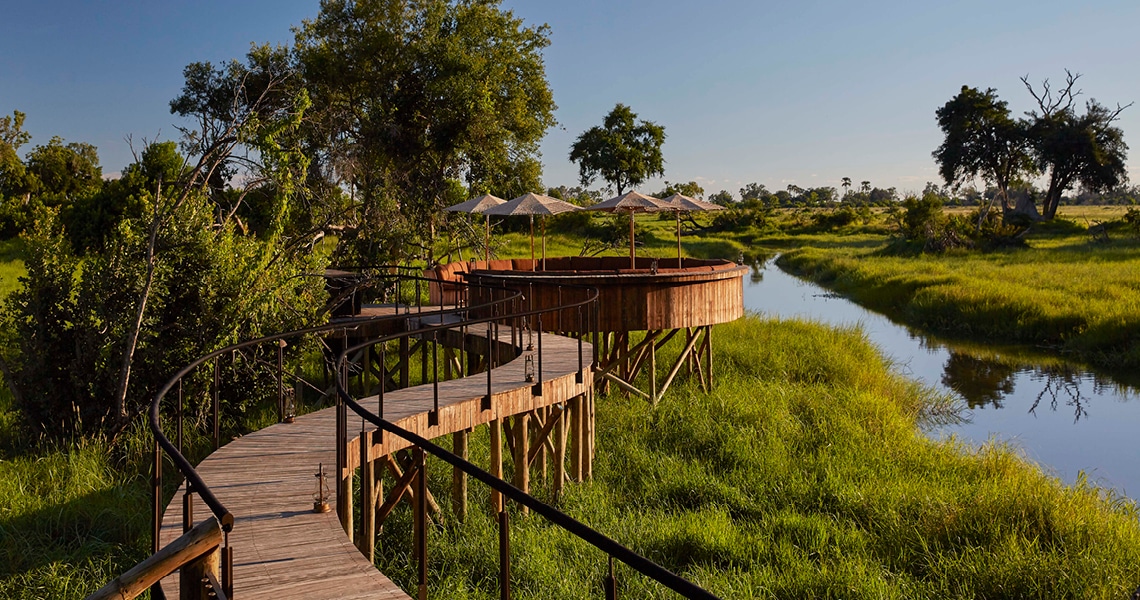 Yet even the biggest blow-out budget could not buy unique blessings from Mother Nature. Halfway through construction, two newborn leopard cubs were discovered on the floor of one of the suites. Then, a few weeks before the lodge was completed, a lioness gave birth to her cubs below the raised walkway, and remained there until territorial males in the area forced her to move to a new, secret hiding place to keep the little ones safe. 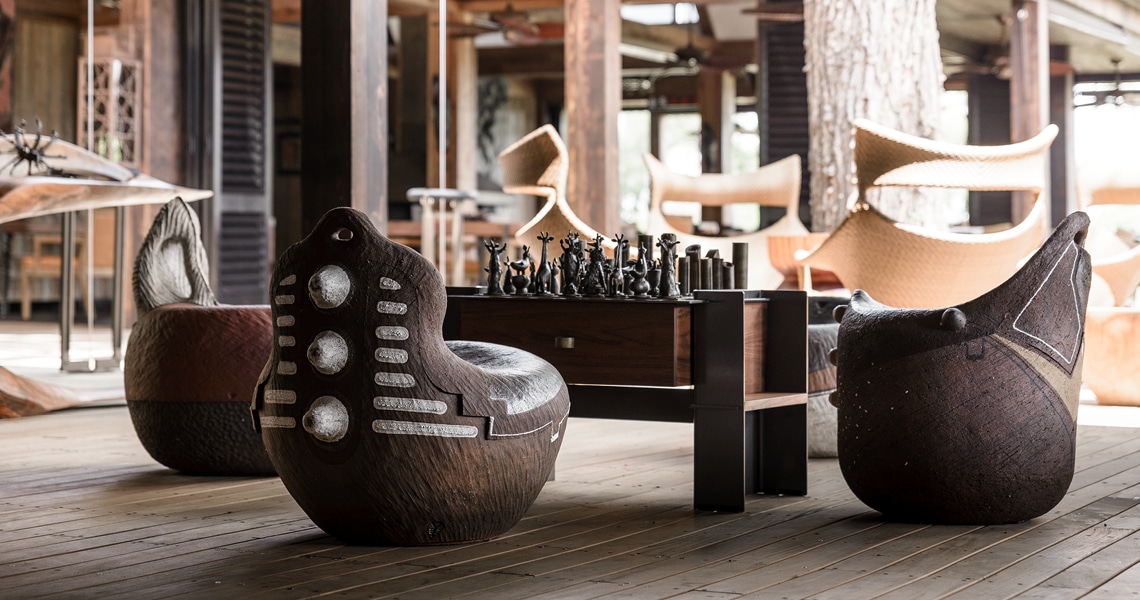 Unsurprisingly, whether you’re on a walk or a game drive, the game viewing at Xigera is off the charts – the equivalent of edited highlights of a wildlife documentary. The guides, many of whom have lived and worked here their entire lives, know every turn, every tree and every cub born to the lions and leopards that frequent the area.

One guide, after safely navigating a guest through gin-clear, lily-filled shallows in a mokoro, deftly crafted a plaited rope necklace and decorative locket from a single strand of cross-walled sedge grass as a keepsake. This humble, hand-woven adornment became symbolic of all the makers who contributed to Xigera, preserving age-old crafts and skills, and elevating that which is produced by hand to its rightful place.

A TRAIN. A STORY. A LUXURY EXPERIENCE.