Leaving nothing to chance, engineers working on the first all-electric Lexus - the new UX 300e - have improved chassis,…

Leaving nothing to chance, engineers working on the first all-electric Lexus – the new UX 300e – have improved chassis, drivetrain and cabin insulation to craft a crossover which seeks to redefine the term ‘silent’. The focus on quietness is in keeping with a heritage dating back to the very first Lexus produced.

For over 30 years, quietness has been a central pillar of every Lexus model. A core development imperative for the ultra-refined LS 400 luxury sedan in 1989 was that the noise level in the cabin would not exceed 58 dB when cruising at 100 km/h, making it quieter than any of its European rivals. This goal became an obsession for many of the 4,000 designers, engineers and technicians working on the car. A silent revolution was born, which would become a key part of the luxury carmaker’s DNA and which finds its latest expression in the new Lexus UX 300e.

“A serene cabin environment is an essential part of our brand DNA, and this first all-electric Lexus gave our engineers an opportunity to bring out that quality like never before,” comments Pascal Ruch, Head of Lexus Europe.

From studying noise patterns in other luxury BEVs, specific actions were taken to reduce in-cabin noise. 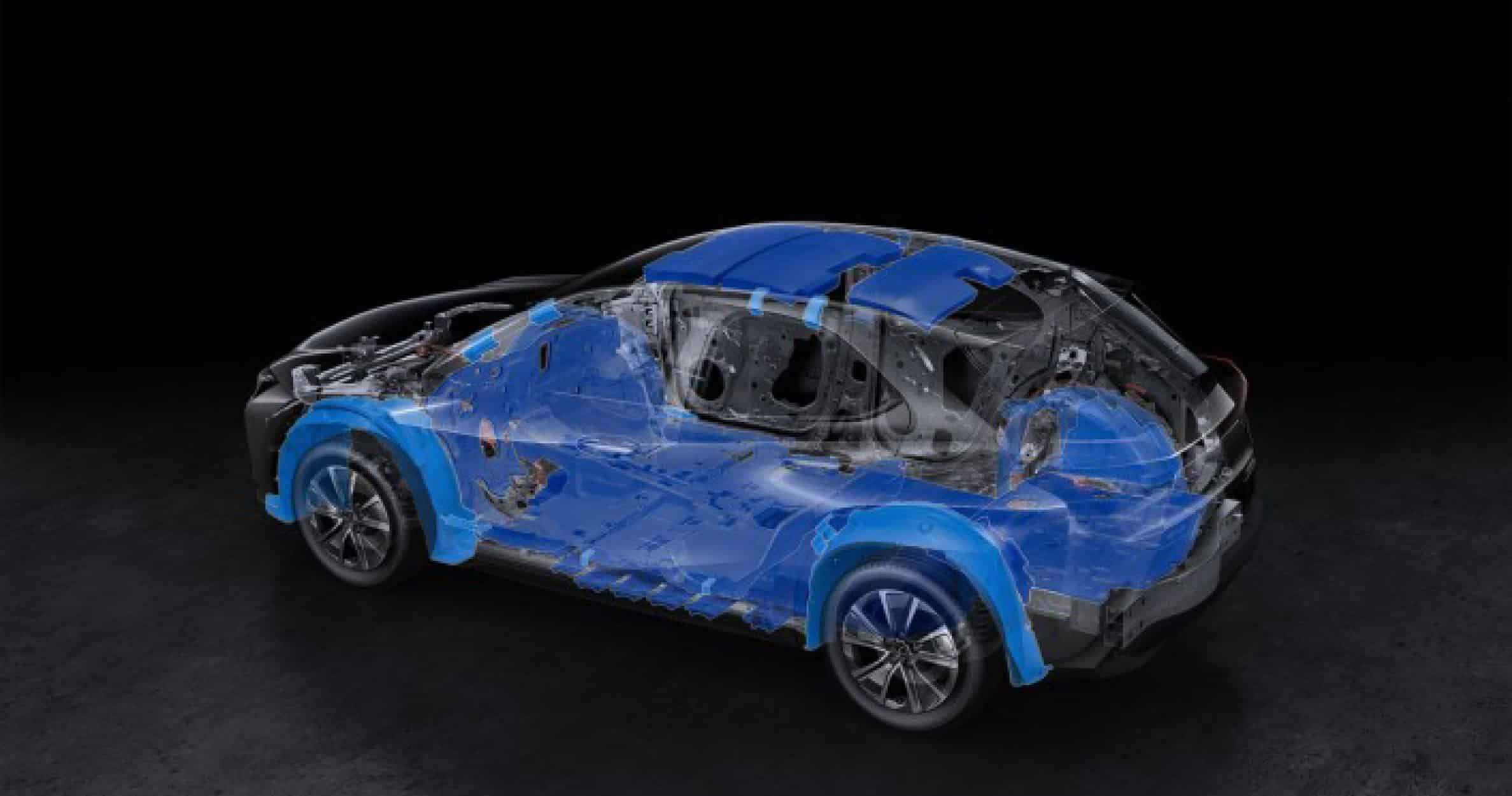 The Lexus emphasis on minimising NVH (noise, vibration, harshness) allows the driver to relax in the tranquillity of the UX 300e cabin, suppressing nearly all outside disturbances such as wind and gravel noise which would be noticeable in a conventional car.

The thickness and weight of the battery pack under the cabin floor act as a natural sound-insulating barrier, while underfloor covers and fender liners have been added to reduce the amount of noise caused by contact with small stones, dirt, water and road. Even the car’s compact new PCU is installed on the engine compartment’s main cross member to ensure less noise and vibrations.

Taking wind noise reduction to the next level, the UX 300e is equipped with innovative aerodynamic shutters in the lower front grille, which open and close automatically depending on the battery state, reducing the car’s coefficient of drag from 0.33 to 0.31. Also unique to the UX 300e and designed to reduce noise even further, the bottom surface of the battery has been made smooth and the car’s underfloor covers have been enlarged, creating an aerodynamic underbody structure.

Fitted with acoustic glass to reduce high frequency wind noise, driver and passengers are cocooned in a sound-insulated luxury cabin, with extensive foam and damping materials reducing both BEV drivetrain sounds and road noise. This includes an extra layer of insulation installed underneath the carpeting, whilst a dashboard silencer reduces cabin noise levels even further.

The UX 300e is built at Lexus’ award-winning Kyushu plant. Before shipping, every car is checked and rechecked for perfection in a ‘Quiet Room’ facility by Lexus’ Takumi craftspeople, using their uniquely trained ears and fingertips to detect and rectify the minutest noise or vibration within the cabin.

The Lexus UX 300e will be introduced to selected markets in Europe by the end of the year.

Making it beautiful, making it work