The frozen wastelands of Siberia are not the natural environment for Lexus vehicles, but they provided the thrilling setting for a driving experience that tested the handling capabilities of two very different models: the RX large luxury hybrid SUV and the V8-powered LC coupé.

The location for the adventure drive was Lake Baikal, the world’s deepest freshwater lake, that freezes to a depth of 1.5m in temperatures that can fall as low as -60°C. In fact, the ice is so thick and strong, the lake becomes part of Russia’s national roadwork.

A remarkable setting called for a remarkable driver and Lexus recruited the talents of Nikita Shikov, one of Russia’s leading drift champions. His achievements include being a two-time vice-champion in the Russian Drift Series, vice-champion of Formula Drift Russia and a winner of the Auto Exotics Cup. In spite of his experience, this was his first time driving the Lexus on ice – a very different surface from the race tracks he is used to. 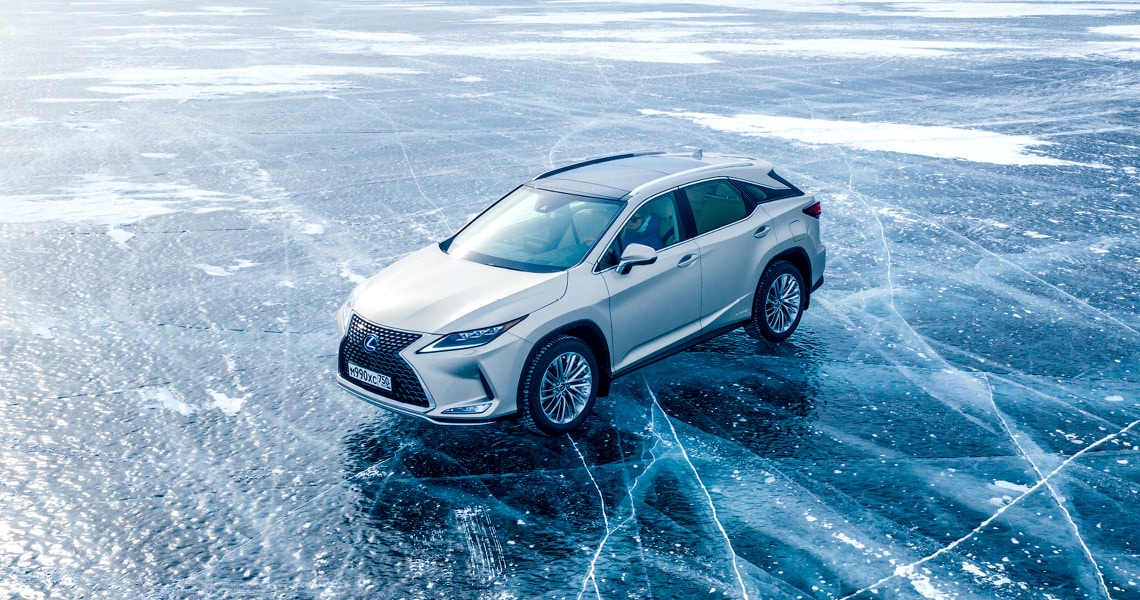 THE FROZEN WASTELANDS OF SIBERIA ARE NOT THE NATURAL ENVIRONMENT FOR LEXUS VEHICLES. 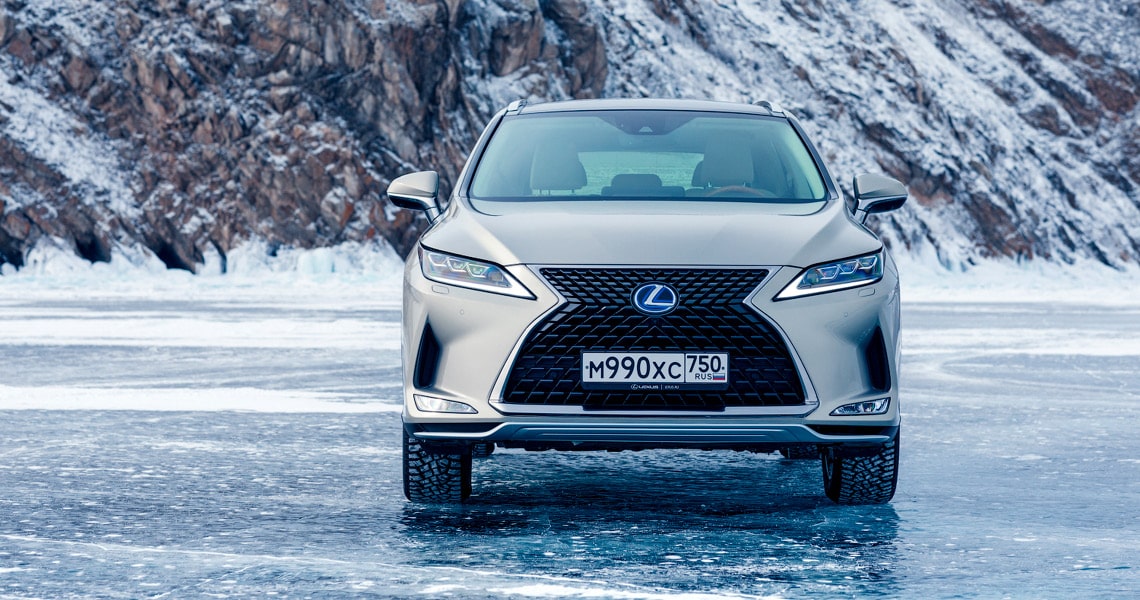 The RX has an impressive heritage as the world’s original “luxury crossover,” but putting this stylish SUV to an extreme test was new milestone in its history. Shikov admitted that, before taking the wheel, he had doubts about how it would perform with its electronic E-Four all-wheel drive system.

“Initially I was sceptical, as the RX operates by default in front-wheel drive – the rear wheels come into play only when sensors detect the wheels are starting to spin or slip. But once on the ice, I soon discovered the rear axle switches on very fast, so you can confidently make a controlled power slide with all four wheels.”

In fact, Shikov was able to execute some very dramatic manoeuvres, capitalising on the front-wheel grip. The wheels spun faster than 180km/h while straight-line speed reached 100 km/h.

“THE REAR WHEELS SENT UP IMPRESSIVE SNOW TRAILS, JUST LIKE THE CLOUDS OF SMOKE YOU GET WHEN DRIFTING ON A CIRCUIT.” 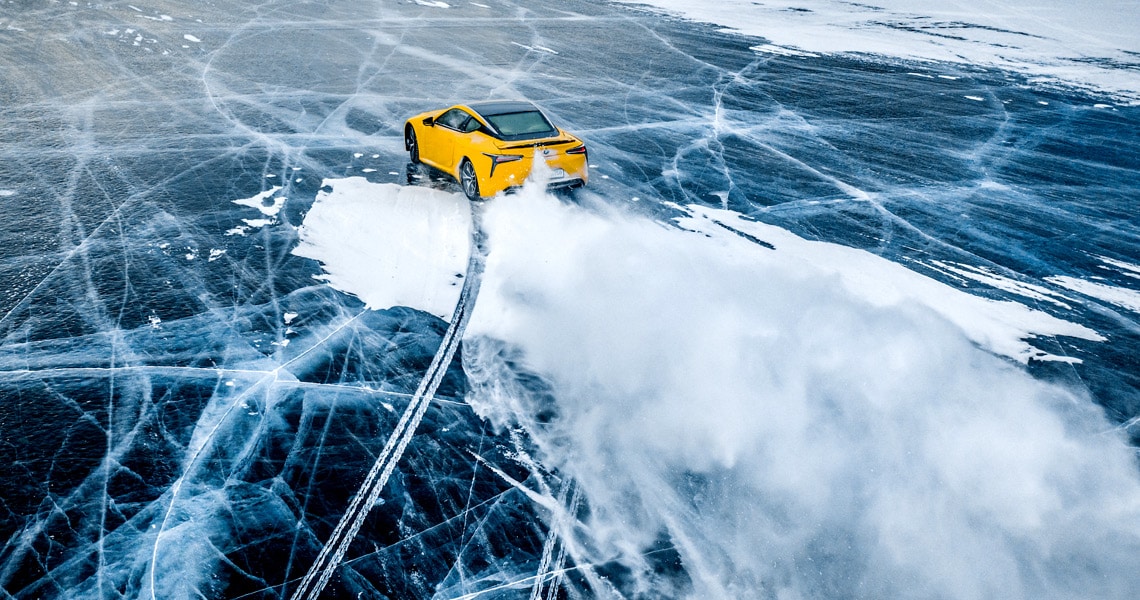 The LC, with its 351kW V8 engine and rear-wheel drive was a very different prospect and even before he reached the ice, Shikov was impressed with its character. “I know its character as a cruiser for long-distance, high-speed journeys with its great aerodynamics, perfect handling, comfortable cabin and ideal driver’s seat position,” he said.

“When you are out on the ice, though, you feel the rear-wheel drive right away. Because of the car’s weight and the fact that we were running on standard tyres, the acceleration was not the main thing, it was all about driving technique, finding the car’s limits.”

Shikov revelled in the opportunity to drive the LC on the Baikal ice, with its dusting of snow on the surface. “The grip came and it was almost like driving on tarmac,” he said. “I was able to experience the car’s real personality, with wheel speed at around 280 km/h. The rear wheels sent up impressive snow trails, just like the clouds of smoke you get when drifting on a circuit.”

Strict safety measures are followed when driving on frozen lakes “in the wild”. You don’t wear seatbelts, the audio system must be switched off and the doors must be kept unlocked; the condition of the ice is also carefully monitored for any tell-tale signs of weakness.

For Shikov’s spectacular drives, all the electronic handling and stability systems were switched off. This means the performance was down to the car’s pure capabilities and the driver’s exceptional skills.

Taking the RX and LC to Siberia was a true test of their quality. For the RX 450h, the double-digit sub- zero temperatures proved no barrier to the hybrid electric powertrain’s operation. Across the rough and icy terrain, it also proved to be a sure-footed performer with its E-Four electric all-wheel drive capability.

For the LC, a car designed more with great winding coastal roads in mind, the frozen lake became an arena for a display of expert driving skills. Other drivers were free to explore the limits of the rear-wheel drive coupé’s potential, with no It was an exceptional show to demonstrate the exceptional reliability of Lexus vehicles. 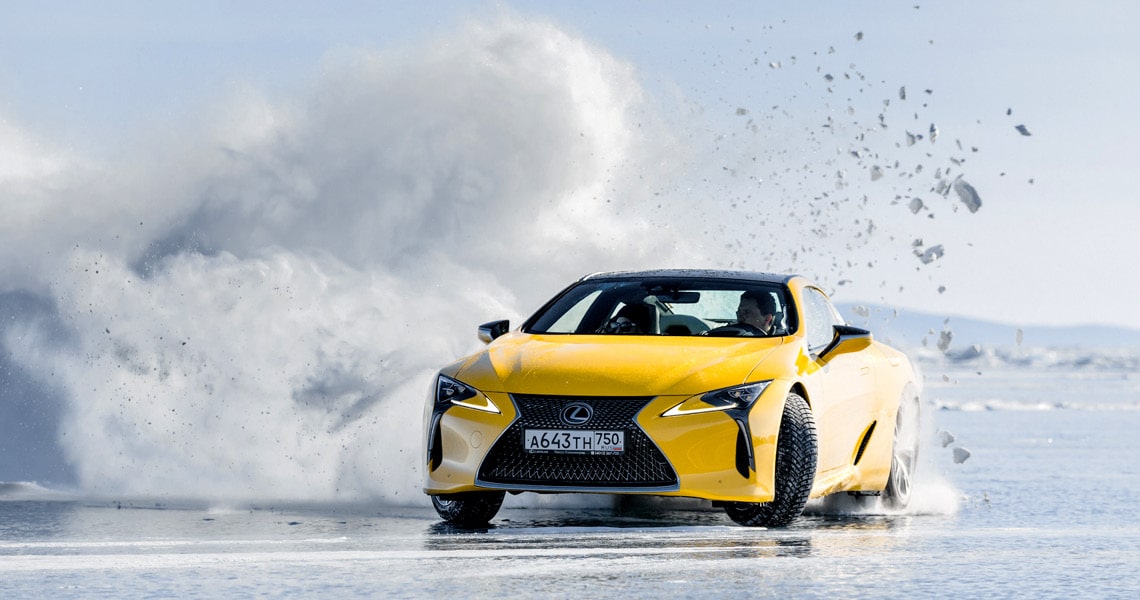 Making it beautiful, making it work