LEXUS IS: THE EVOLUTION OF AN ICON

Twenty years before the introduction of the 2021 Lexus IS last summer, the iconic rear-wheel-drive compact luxury sedan blazed a trail for the power of performance.

This is the car that initiated Toyota President and master driver, Akio Toyoda, into the exhilaration of performance driving, and tapped into the desire for an emotional feel behind the wheel. In balancing a sports car with a sedan, the IS created an ideal synergy for a new kind of Lexus guest.

The IS may have evolved in shape, size, efficiency and power, but it has stayed true to its stimulating heritage, retained the craftsmanship expected from Lexus, and created a culture of style and expression all its own.

Now, the IS launches the newest chapter in its story of innovation at Lexus as the first of the lineup to feature the Lexus Driving Signature approach to design. To chart the course of this groundbreaking driving experience, here is a look back at major milestones for the model that shook up luxury and forged a time-tested bond between driver and machine. 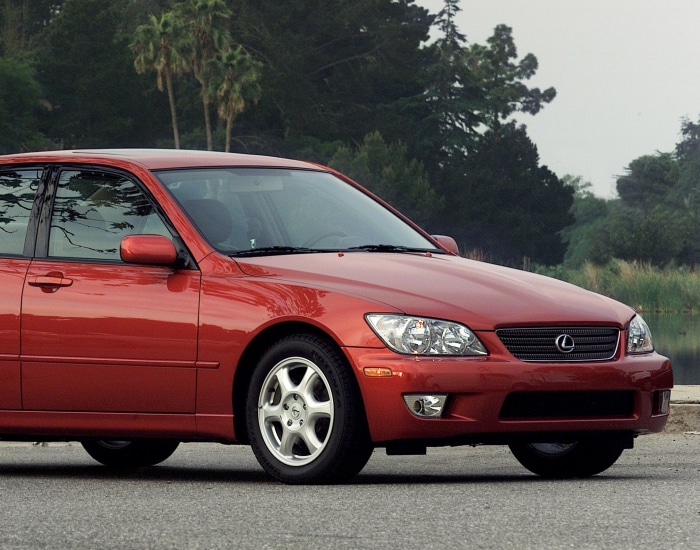 It was a star from the start.

At its debut, the Lexus IS staked its turf as a driver’s car. Announced in 1999 and debuted for sale in 2000 for the model year 2001, the Lexus IS announced a defining moment for the sports luxury sedan market. With its front-engine rear-wheel-drive (FR) layout, the IS also set the stage for future Lexus sedans, which would lean into the delectable dynamism of FR. Style also moved into new territory thanks to a pioneering look to the taillights, which quickly became a signature feature and popularized the style for the next decade. Encasing the internal lamps of the taillights with clear (or tinted) acrylic glass was just one fresh idea in the creation of the classic model.

• “IS” is short for “intelligent sport,” a nod to the mechanically dynamic design of the new luxury sport sedan that would electrify the segment.
• The IS 300 featured the naturally aspirated version of the 2JZ-GTE found in the MKIV Supra.
• The IS was the brainchild of Chief Engineer Nobuaki Katayama, the creator of Toyota’s high-revving FR classic, the AE86, a hero of the early days of drifting and central to the lore of a Japanese manga and anime series well known to enthusiasts. 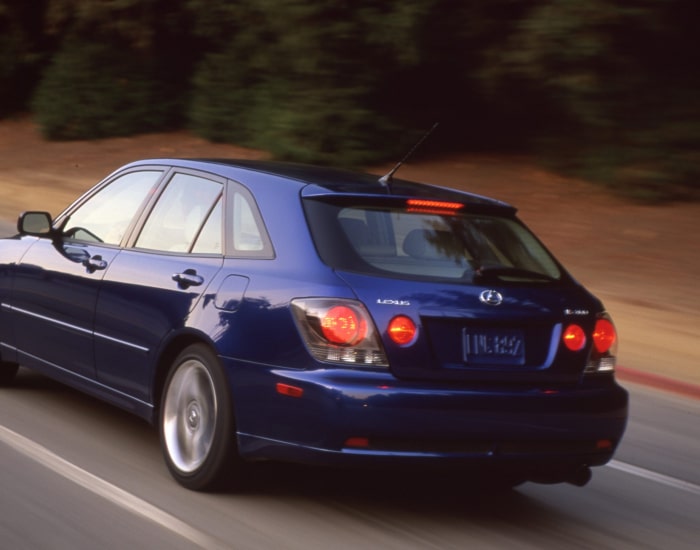 In the early 2000s, a lifestyle shift was well underway, and Lexus adapted the performance-fueled IS to meet it. Luxury sedans were at the heart of the culture just as a wave of SUV’s was beginning to swell. Adding cargo space without sacrificing dynamism is part of the core ethos that Lexus holds true to today. The adventurous spirit of the IS 300 SportCross combined the aesthetic of a wagon with the compact vigor of a sedan for a new experience of the roads more taken.

• SportCross came in the following colors: Crystal White, Absolutely Red, Electra Green Mica, Cibola Bold Metallic, and Intensa Blue Pearl.
• The IS 300 was within 0.2 seconds of the non-wagon IS in the 0-to-60 mph test, and the margin between the two in the slalom was a razor-thin 67.6 mph for the sedan; 66.6 mph for the SportCross. 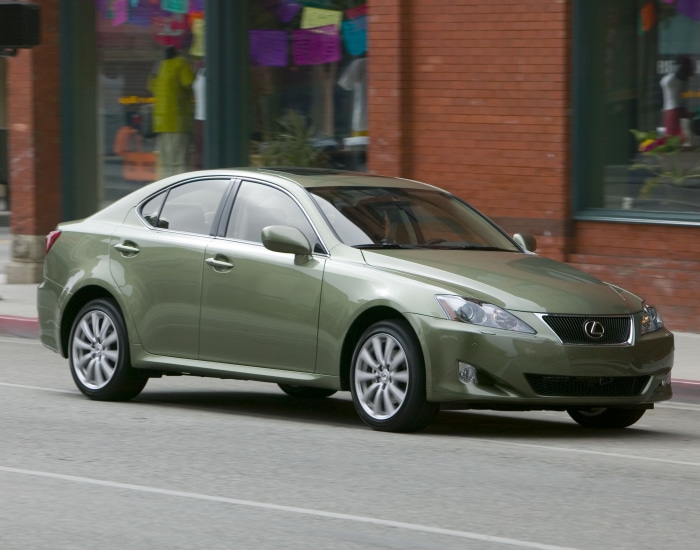 By 2006, the tech era for vehicles was in full bloom and the second-generation IS sedan ushered in a suite of innovations. Keyless ignition, alluring electroluminescence display lighting, plus enhanced safety features helped create a state-of-the-art driving experience. Combined with a significant engine upgrade and a sportier suspension, the IS 250 embodied the new Lexus L-finesse design philosophy.

Adopted in the mid-2000s, the new proponents enabled a sleeker, more efficient ride with updates such as a lowered grille and redesigned rear. The new fastback profile and repeated arrowhead motif on the front fascia and side windows were based on the Japanese concept of kirikaeshi, referring to angular movements. Interiors were based on the Japanese philosophy of hazushi, in which an object retains it individuality while remaining part of the whole. Today, the IS and the full Lexus lineup is inspired by the importance of Omotenashi, the Japanese focus on anticipating a guest’s needs.

The second-gen IS caught on quickly. Forbes magazine reported it was one of the top luxury cars sold, as sales for this model increased in the U.S. by 332 percent. 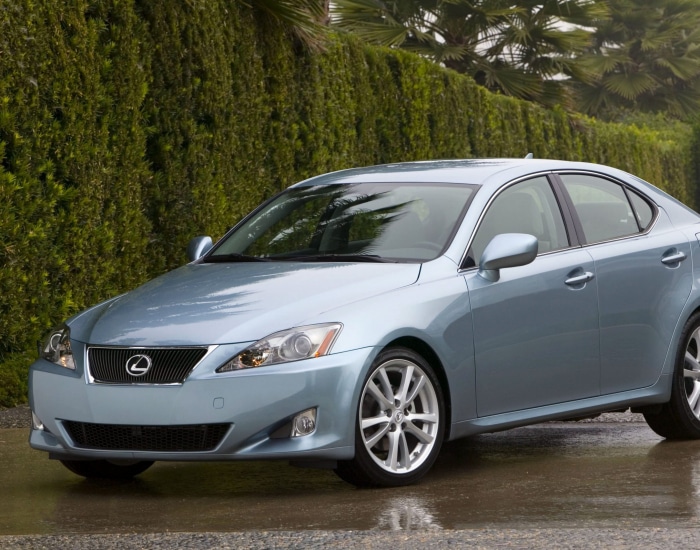 A fusion of comfort and performance, Lexus in 2007 offered the typically high-tuned, well-equipped IS 250 along with its sportier sibling—the IS 350.

• The 350 offered a sizzling 0-to-60-mph acceleration with a time of 5.6 seconds.
• The 2007 edition introduced the “X Package,” a collection of race car features like a front spoiler, sport pedals and illuminated door scuff plates.
• In 2007, the IS F made its international debut as the first vehicle in the F performance line, it accelerated from 0-60 mph in 4.6 seconds. 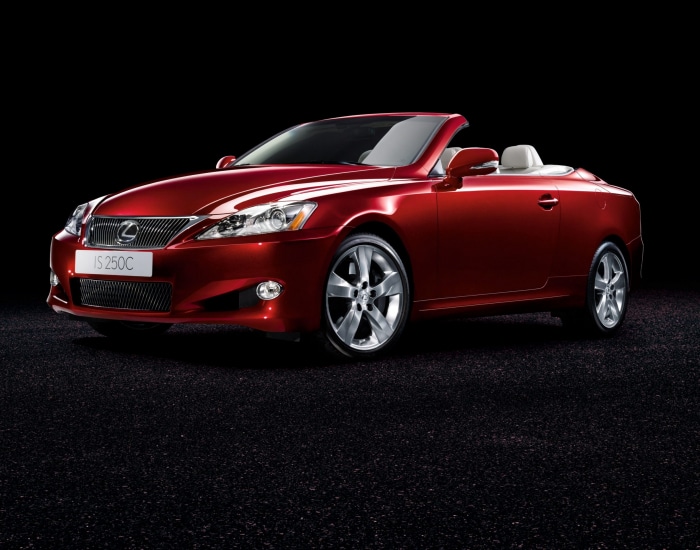 Sometimes you just want to feel the breeze—all the breeze. And after nearly a decade, Lexus gave its guests plenty of big air. The 2009 editions of the IS — the 250 C and more powerful 350 C — saw the introduction a two-door convertible coupe. The bond between driver and machine continued its journey, only now it cruised with the top down.

• Lexus engineers made subtle design changes to the car’s exterior to help ensure minimal wind turbulence in the cabin, allowing drivers and passengers to carry on a conversation comfortably while enjoying the open air.
• Some sounds, though, were desirable. Lexus implanted an equalizer-tuning feature in the audio system to deliver clear transmission and tone regardless of the top’s position. 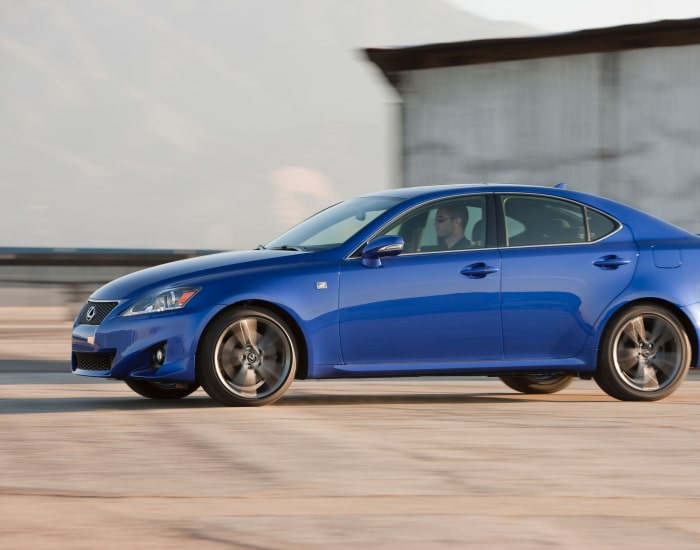 2013 ushered in the new model year IS with Lexus’s customary philosophy of craftsmanship, which here means maximum performance in a streamlined format. Lexus’ high-performance F editions innovated a 5.0-liter engine in a compact sedan. Fittingly, the “F” stands for Fuji International Speedway in Japan, the track where Lexus tested out its new line of high-performance cars.

• A sign of the times: automatic Bluetooth® to connect with devices was added to the 2013 edition of IS.
• Ultrasonic Blue Mica, the new paint available in the sports edition, paved the way for the next generation of Lexus’s legendary blue paint colors, including Structural Blue, available on the 2021 LC500 convertible Inspiration Series, and Grecian Water, standard on the 2021 Black Line Edition lineup.

The Lexus IS sedan continues to evolve, with the ultimate goal of delivering a new generation of Lexus vehicles that is more balanced, refined, in control, and confident than ever before.