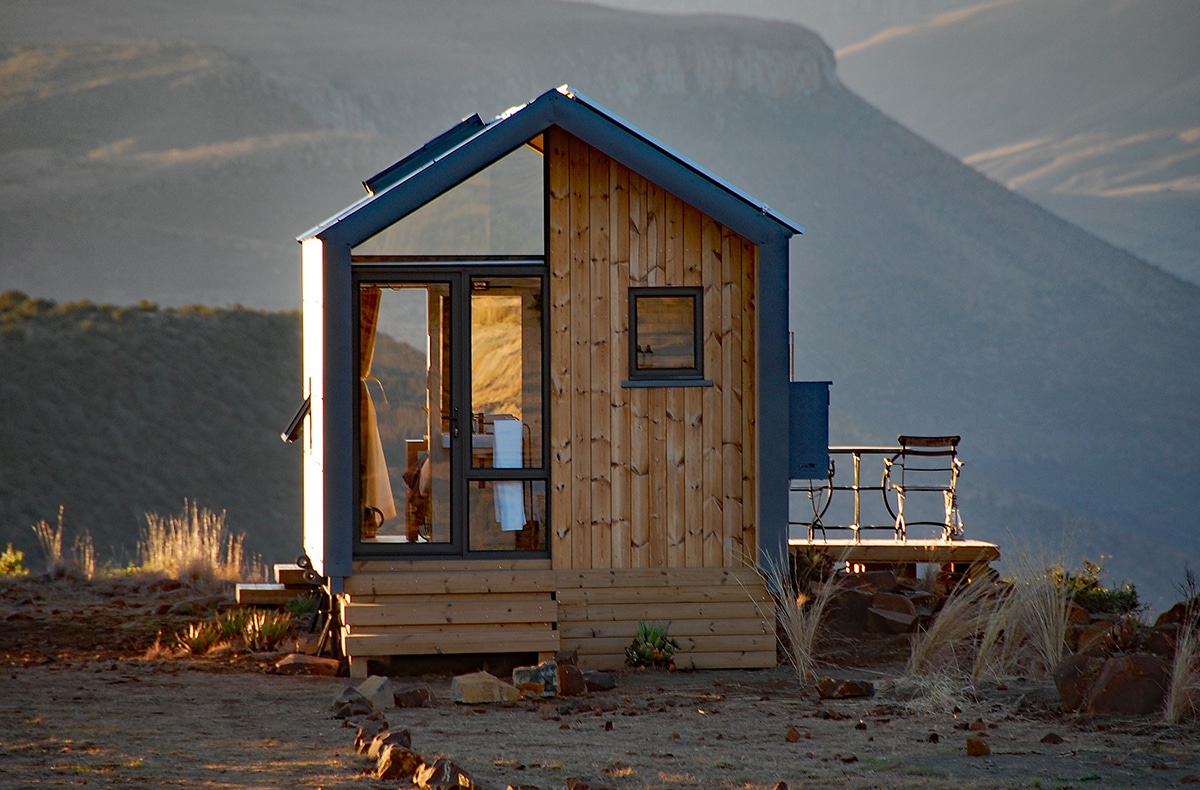 At home on the range

Mount Camdeboo Private Game Reserve in the Eastern Cape is a unique safari experience, with isolated luxury pods in the bush offering full immersion in nature.

We’ve all heard the saying that “curiosity killed the cat”, but it wasn’t too long ago that the inquisitiveness of a pair of overgrown fur babies nearly scared the life out of me.

It was one of the best days of my life.

Ever since Mount Camdeboo Private Game Reserve owner Iain Buchanan told me on an earlier visit that he intended to site two luxury prefabricated cabins (he calls them “pods”) on the Big Five section of the 14,000ha reserve, I nagged to be one of his guinea-pig guests.

The existing accommodation, he’d told me, comprised three manor houses and, wonderful though these were, they didn’t allow guests to experience the intensity of wild Africa.

The pods will connect you to nature and nature will be connected to you. It will be off-grid ‘glamping’ taken to the next level, and not for the faint-hearted.

Buchanan said his vision “was inspired by what I saw in Scandinavia where tiny homes have become trendy. Lightweight structures are popular for tree-house experiences, but nowhere could I find anything prefabricated that was suitable for use on a Big Five game reserve.”

With his vision of “a luxurious micro-space” taking shape in his head, Buchanan consulted architects and engineers in Cape Town, and APEX Glamping was formed to build “off-grid, self-sustainable units finished to the highest quality standards and finishes”.

However, the things that excited me most were the pods’ isolation and the fact that they wouldn’t be fenced in… alone in Big Sky country with all the mod-cons, including a wood-fired hot tub. What I craved most, though, was that epic silence that is punctuated only by calls of wild eagles, baboons, elephants and so much more.

There were none of the usual distractions such as mobile phone reception or WiFi (there was radio-comms with reserve reception for use in event of emergencies). The plan, said Buchanan, was that guests would book into the reserve for two nights at one of the manor houses with an option of a third in the veld “if they felt up to it”.

With me it worked differently. After arriving on the reserve mid-afternoon, I spent the evening at Camdeboo Manor before being whisked into the bush the next morning and dropped off at Eagle’s Flight — a drive of about 30 minutes. There I would stay for the next two days and nights, with field staff popping in twice daily to check if I was okay and deliver supplies. Head ranger Letishia Kleinschmidt left with the warning: don’t wander far from the pod.

A visit from lions

This was eminently sensible advice and I heeded it. What I hadn’t counted on were two young sub-adult lions from the resident pride being curious about the new structure that had sprung up almost overnight in their territory. The first I knew of their presence was a soft leonine grunt as I was lighting my braai fire on the second afternoon. I looked up and there they were… four metres away. As Iain predicted, nature had connected with me.

Long story short, I experienced a moment of complete terror before common sense prevailed. I then spent the next few hours in a state of elemental bliss — albeit in the safety of the pod — while dem puddytats assuaged their nosiness. And yes, there is now Wi-Fi so you can make WhatsApp calls to the rangers, and a hip-high electric fence has been erected at a discreet distance from the pod to discourage uninvited locals.

Buchanan’s latest luxe getaway in the boondocks is a large geodesic dome that looks like nothing so much as an igloo on steroids. I got a look at it just after it had been erected on an exposed mountaintop, but before finishing touches such as solar power and plumbing had been installed. A monstrous thunderstorm was moving in and, while we gapped it back to Camdeboo Manor for safety and warmth, I’d gladly have stayed and played Shackleton for the night.

Mount Camdeboo Private Game Reserve is not just about adventurous living; there is serious conservation work taking place, including wilding cheetahs born in captivity to help save this endangered species from extinction.

The stars of the show over the past couple of years have been Saba and Nairo, two brothers donated by the Aspinall Foundation in England, and Ava, who arrived from Ashia Cheetah Conservation via Kuzuko Lodge near Kirkwood. Ava was earmarked to pair with the brothers, but another local male got in first and she had three cubs before she even met the foreigners.

All three little ones were already hunting successfully for themselves under the tutelage of their mother, but went missing when they were nearly a year old. The fact of their deaths became evident when she immediately went into oestrous and she paired “presumably with Nairo, because he was more obviously active with Ava”, says reserve manager Ulrich Schutte, with the result that she gave birth to a litter of four seven months ago. Saba unfortunately subsequently died while hunting.

Mount Camdeboo is located 80km south-east of Graaff-Reinet along the R63 to Pearston/Somerset-East in the Eastern Cape region of the Groot Karoo. The property is managed by Newmark Hotels and Reserves. 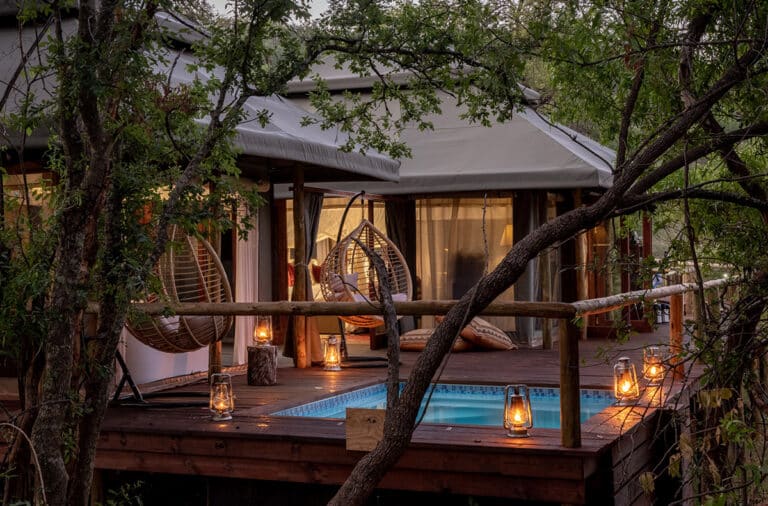 Tintswalo Lapalala, a luxury tented camp in Lapalala Wilderness Reserve offers a sublime bush experience with all the extra trimmings. 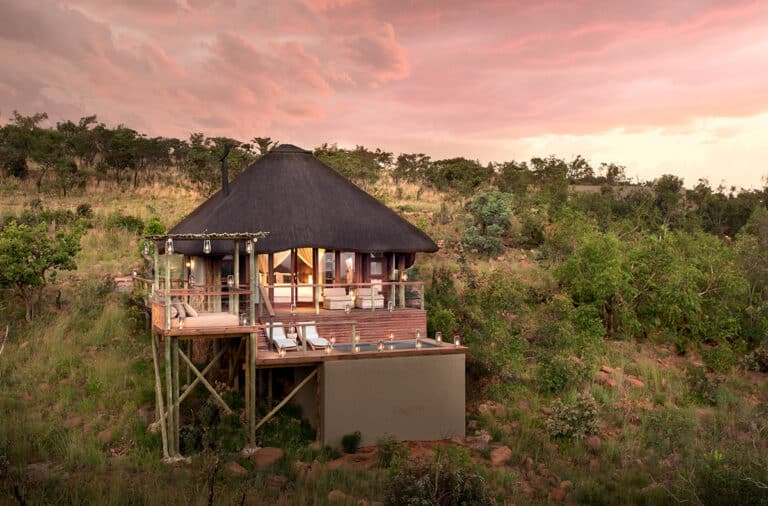 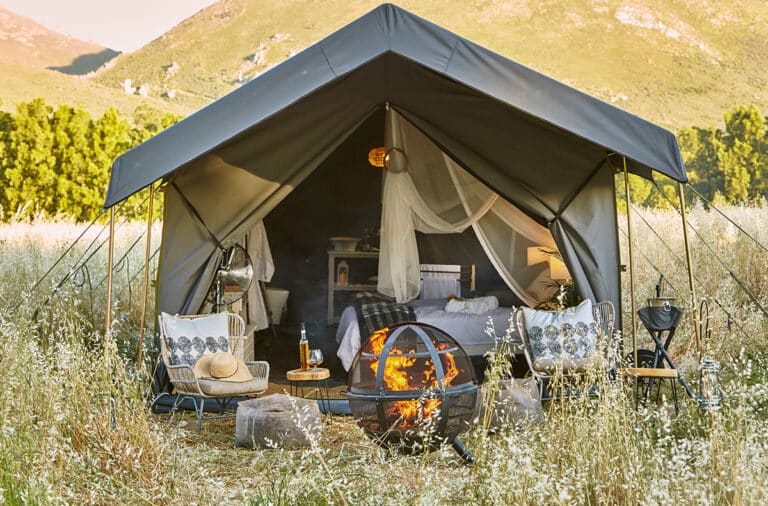 Imagine transporting the equivalent of a picture-perfect hotel suite to the middle of the great outdoors… Well, now you can!